When military forces of the Evil Empire began to inflict mass violence upon the sovereign nation of Iraq in February 2003 they did not count on many millions protesting against the war crimes, and few if any approving the war crimes.

We had the distinguished honour of hosting a large rally of about 100,000 pro-peace anti-war demonstrators. 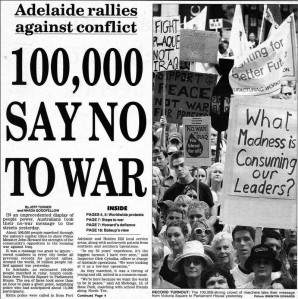